Tauren Paladins in World of Warcraft

In the wildly popular online game World of Warcraft, Taurens were one of the original races of the Horde faction, writes ny-online-casinos.com. The Taurens, led by Chief Cairne Bloodhoof, were dedicated to worshiping the forces of the earth and its creatures. Taurens are the only Horde race that can be druids, and much of their class-specific quest lines revolve around the spirits of animals and reverence for the land. They worship the Earth Mother, and live an existence that mirrors those of Native Americans.

About a decade ago the World of Warcraft expansion included the ability of Tauren to choose the Paladin class. How does the Paladin class, which focuses on the power of the “Light” fit into the lore of the Tauren race?

Currently, only Blood Elves in the Horde faction and Humans, Dwarves, and Draenei of the Alliance faction can choose the Paladin class.

Hints of Change in Tauren Philosophy

Even before Blizzcon, a clue was provided that got the Warcraft fan base buzzing. In a patch, a quest was added in Dalaran that involved returning a shield to a Tauren non-player character (NPC) in the city of Thunder Bluff. While the quest itself isn’t all that interesting, the conversation between the NPC and a Tauren druid, Tahu Sagewind is worth hanging around to listen to.

The two Taurens talk about the origin of druids, the moon and the sun, and the source of the Night Elf’s power, the Moon goddess Elune. It is inferred that the Tauren belief system may be out of balance because they only focus on the power of the moon, like the Night Elves, for their druidic magic.

The Cataclysm expansion provided an answer to the questions generated by this seemingly innocuous quest. Tauren would gain the ability to become both paladins and priests. At first, a player with any background in Tauren lore would find this addition puzzling, but as with much of the world of Azeroth physically changing in the expansion, the Tauren’s views of magic are changing as well. 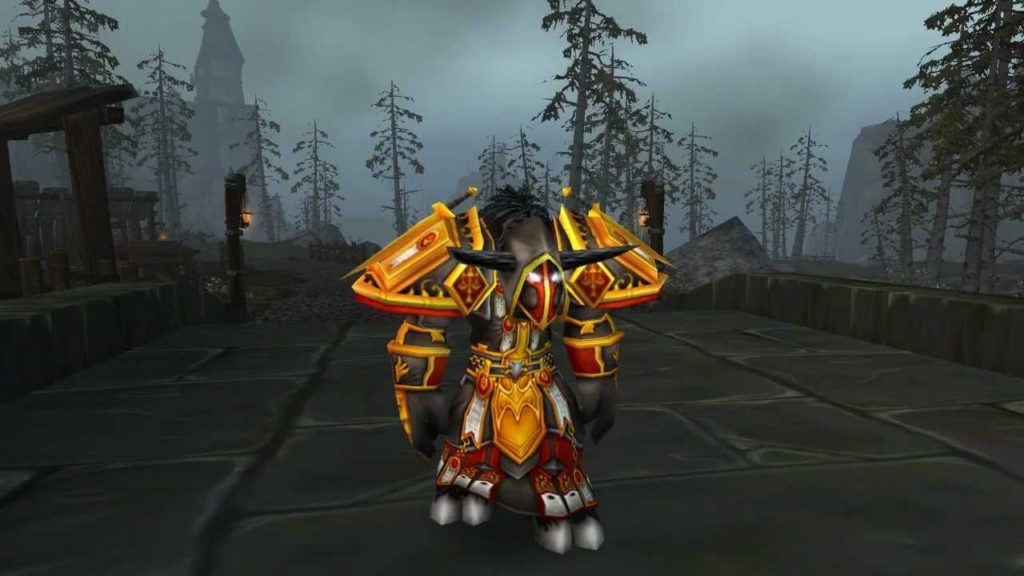 The simple conversation between two Tauren NPCs suggests that the Tauren will draw on the magic of the sun to cast the spells and use the abilities of the paladin and priest classes. With this realization in mind, the addition of the paladin class to the Tauren race makes sense.

As for gameplay, Tauren are already widely used as tanks (warrior and druid forms) and healers (druid and shaman forms), so the functions of the paladin class do fit with the existing roles of Tauren.

Dwarf Shamans in World of Warcraft

The Dwarven race is one of the original Alliance factions in the massively popular online game World of Warcraft. In the recent announcements of the next game expansion, Cataclysm, players who choose the Dwarf race for their character will be able to select the shaman class. How is the addition of shamanism to the Dwarven race justified based on the lore of Dwarven culture in the Warcraft universe?

Emergence of the Shaman Class in the Dwarven Race

In the original release of World of Warcraft, the shaman class was limited to races within the Horde faction. With the release of the Burning Crusade expansion then, the Draenei race, added to the Alliance faction, allowed Alliance players to experience playing a shaman.

Again, about a decade ago, Blizzard announced development of the next World of Warcraft expansion: Cataclysm and it was said it would allow a wide variety of new race-class combinations, including Dwarven shamans.

At first glance, the addition of the shaman class doesn’t seem to make sense in terms of the Dwarven culture. Dwarves and humans were the only races in the original game release that could be paladins, and both races revere the Light.

While no in-game quests or events have provided any direct hints to the emergence of the shaman class, there are two areas of lore that could point to its link to the Dwarven culture. The first is the existence of the Wildhammer clan of dwarves, currently represented at Aerie Peak in the Hinterlands.

According to Warcraft lore, the Wildhammer clan was one of the dwarven clans involved in the War of the Three Hammers. The Wildhammer dwarves avoid technology, unlike their Bronzebeard counterparts, and revere spirits of nature. They have especially close ties to the gryphons of Aerie Peak. The Wildhammer clan has always been loosely associated with the Alliance faction, and have actively opposed the Horde faction.

In addition to the existence of shamanism in the Wildhammer clan, the events unfolding in the Wrath of the Lich King expansion have provided additional background on the creation of the Dwarves. Dwarves have an exceptionally close tie to the earth, and this tie may be explored in the next expansion through mechanisms such as earthen spirits. WoW.com has speculated that a Wildhammer clan shaman may offer his services to the Dwarven king during a pre-expansion event, but that remains to be seen.

While the addition of the shaman class to the Dwarven race initially doesn’t fit the Dwarf stereotype, game lore and current game history show that the shaman class could easily slip into Dwarf culture.

The ny-online-casinos.com is presently one of the best online game sites on your browser and it is a reliable as well as trustable. Its app version is available on Android and iOS. You can play with real money easily and on the go. It comes with easy navigation and attractive user interface.

Who Gets Coverage in Worker’s Compensation?

The Most Popular Smartphones in 2020

Have a Halloween party and celebrate the dead