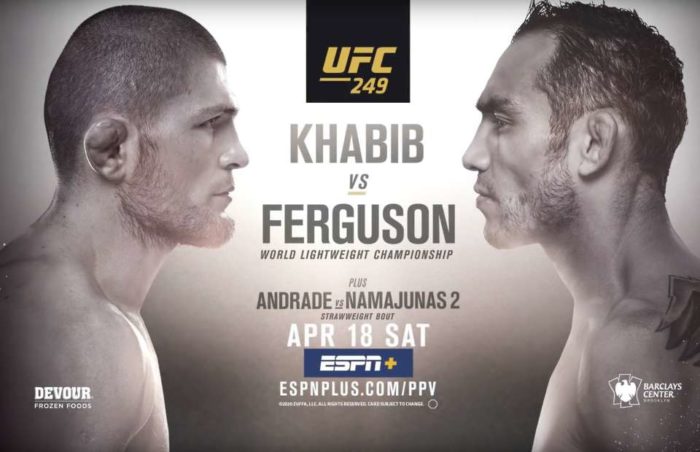 With almost every sport off the betting menu, a few upstarts have remained – The UFC 249 matchups and the highly anticipated Nurmagomedov vs. Ferguson fight scheduled for the 18th of April in the U.A.E.

Unfortunately, due to Russia’s newly minted travel ban, UFC 249 sports gambling bettors looking to wager on Khabib or Ferguson will now be going hungry for the foreseeable future.

Last week, the Russian lightweight champ Khabib Nurmagomedov took to social media to tell fans that he won’t be able to get to the UFC fight – due to the new Russian travel bans everything was now out of his control. UFC President Dana White also confirmed this but confirmed that UFC 249 will still happen, only without Team Khabib.

The UFC fans and those who partake in UFC 249 sports gambling didn’t take this too well. That’s not surprising. The Nurmagomedov vs. Ferguson card was the main attraction of the UFC 249 2020 event.

Plus, fans have already been driven stir-crazy with anticipation by the on-again-off-again match-up between Ferguson and Nurmagomedov. It’s been five years in the making, and this cancellation marks the fifth time that the fans will be disappointed by the ill-fated match-up.

Nurmagomedov isn’t taking any of the backlashes, though. Khabib maintains that the cancellation of the fight isn’t his fault, and there is no reason he should be punished for the Russian travel ban, the planning mistakes the UFC has made, or the chaos that the COVID-19 virus has caused.

Will the Fight Go On?

It’s uncertain if the fight will go ahead. And the worsening COVID-19 situation in New York, the USA, and worldwide doesn’t bode well for any sporting events. Despite this, UFC President, Dana White seems determined that the UFC 249 event card will go on.

Should the fight still go ahead, it’s sure to be an interesting one. Plus, you won’t need to go hungry to bet on it or any of the other UFC 249 cards. There are tons of great free bet offers available at the moment. Click here to find your free bet for 2020.

Despite all this, the fight still hasn’t been called off. And most of the other UFC 249 cards are going ahead. Where there is will there just might be away. White doesn’t seem to be backing down that easily, and there are still a few more weeks on the clock for UFC to iron out the details.

Some fighters have even offered to step in for Nurmagomedov. Other fighters have announced they are willing to step into a steel cage with Ferguson, suggesting themselves as worthy opponents.

Justin Gaethje has been reportedly been proposed to step into Nurmagomedov big shoes as a potential opponent for Ferguson, the welterweight champion Kamaru Usman freely volunteered to fight as the main eventer again Jorge Masdival.

But would that really make up for the highly anticipated UFC 249 event? Undoubtedly, a fight without its main star just wouldn’t be the same.

How to choose DC to AC power supply inverters